Holy Family Church was built after the blitz of Barrow during the Second World War and was opened by Bishop Thomas Flynn in 1951.
The war had created a housing shortage and families had moved to the new estates of Newbarns, Dane Avenue, Hawcoat and Beacon Hill, then regarded as the outskirts of the town.
The Catholics living in these areas suggested a church should be built and in 1949 the project was put into the hands of Canon Cecil Wickwar, the parish priest of Sacred Heart.
He purchased a piece of land on Ostley Bank from the Mulgrews, a local family of farmers, and design work was approved by the Diocese in 1950.
The church was constructed by local builder Hugh Rainey and completed a year later when it was blessed and officially opened by Bishop Flynn.

Bishop Flynn at the church opening in August 1951

By then Canon Edward McGough, who succeeded Canon Wickwar, had taken over the project and he administered the church from Sacred Heart with his curates Father O’ Dea, Father Unsworth and Father Costello.
In January 1952, Father Gerard Bilsborrow was appointed as the first parish priest of Holy Family, travelling on his motorbike from his lodgings at the Sacred Heart Presbytery to say Mass. 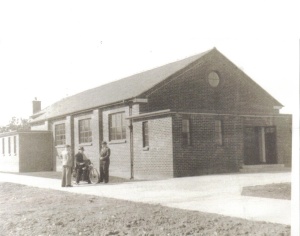 Father Gerard Bilsborrow on his motorbike chatting to parishioners circa 1953

After several months a suitable house was found on Harrell Lane and this became the Presbytery for the church.
Father Bilsborrow installed statues of the Sacred Heart and Our Lady of Fatima in the main church and in the alcove he created a side altar with a statue of St Therese of the Child Jesus. A triptych of the Holy Family, which had been in storage at St Mary’s, was refurbished by Mr Joe Keown and fitted above the altar.
During Father Bilsborrow’s time, St Aloysius School (now St Bernard’s) opened in 1953 while St Mary’s School closed. Schools were built at Holy Family and St Pius. He left Holy Family in 1971 and moved to Pilling.
Father Leo Bamber became the new parish priest and completed the building of Holy Family School. It was blessed and opened by Bishop Thomas Pearson on April 22 1974. 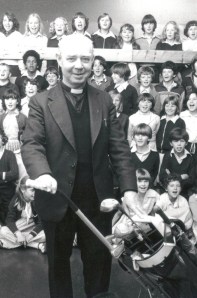 Church attendances increased and Father Bamber’s plan for a new church adjacent to the existing building was approved in 1974. Bishop Brian Foley opened the new church in September 1975.

Father Bamber, who connected the church with the school and was known for his love of golf, was tragically killed in a car crash on Walney in January 1987.
He was succeeded by Father John Heaney who was a deep-thinking priest known for his kindness to the elderly parishioners, ministry for the sick and who led the parish forward into the new millennium.

After serving the parish very faithfully for over 20 years, Father Heaney retired in April 2010 when the Holy Family was linked to St Mary’s and served by Canon John Watson, supported by Father Kevin Dorgan from St Pius.

The church is now part of Our Lady of Furness and has good attendances with a growing Children’s Liturgy Group of over 20 children, is well connected to Holy Family School and has a strong sense of community among parishioners.