St Patrick’s began life as a chapel of ease sometime in the late 1870’s being served from St Mary’s. At that time Barrow was expanding rapidly and large population had grown up on Barrow Island. By 1885 a chapel and school had been built ( both now demolished).

In 1901 St Patrick’s was formally set up as a separated parish, Fr Barry being the first parish priest. The numbers in the area of the parish continued to grow, especially on Walney Island. In 1916 a chapel of ease was set up on Walney. In 1933, the present church of St Patrick was built and opened. The clergy moved into an existing ( and very large!) farm house, that continues as the presbytery to the present day. At that time St Patricks was a thriving parish with many organisations.

St Patrick's with the old presbytery

In 1949 St Columba’s was separated off and made a new parish. To a certain extent that began a long slow decline for the parish. The parish school closed and by the 1970’s those attending Mass had declined to around 120. At this point the church was substantially remodelled – one half being the church the other half a church hall. In 2000 the church was re-ordered according the customs of the neo- catechumenal way.

2003 marked the end of an era. Fr Jim Allen, was the last resident priest, upon his move, the parish was linked to St Columba’s and is now served from there. 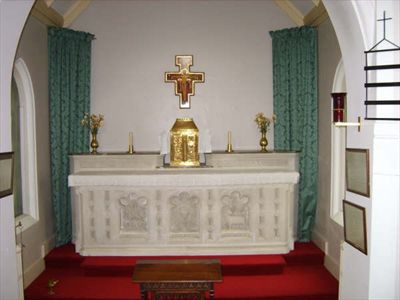